I've finally resigned myself to buying a "daddymobile"; a vehicle more suited to my fatherly duties.

The little one loves the Golf, but I gotta admit that once loaded with a trolley and the baby seat, there's not much room left... And it's not that comfy (nor secure!) to drive long trips for our family of 3.

So there it is, "Krapo Bleu" (Blue Toad) finally goes into retirement after 24 years of daily use, at the ripe age of 32. Almost a quarter of a century, every day, behind this steering wheel, this car has almost become an extension of myself. I'm not gonna lie, I choke up a little bit when I pushed her back into the garage ; and on this last picture I took before I closed the door, looks like she had a bit of a teary eye herself too! 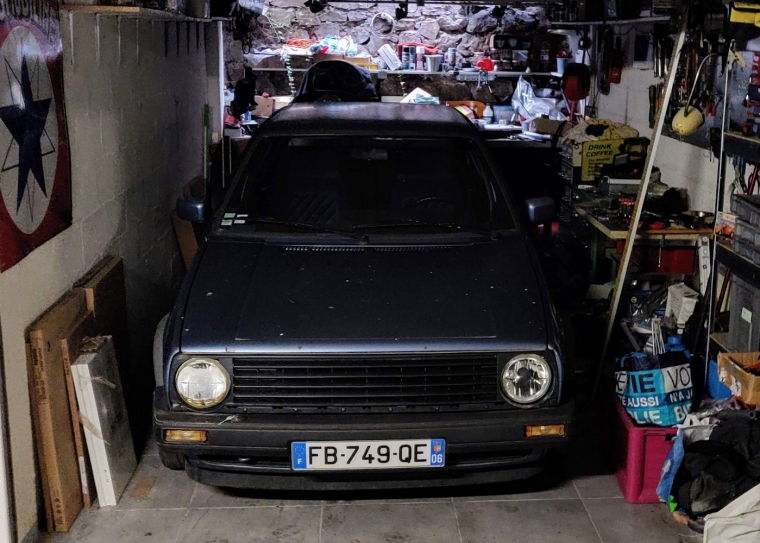 There, you can have a rest now, "my old friend". See you back for weekend rides... Or on track maybe? 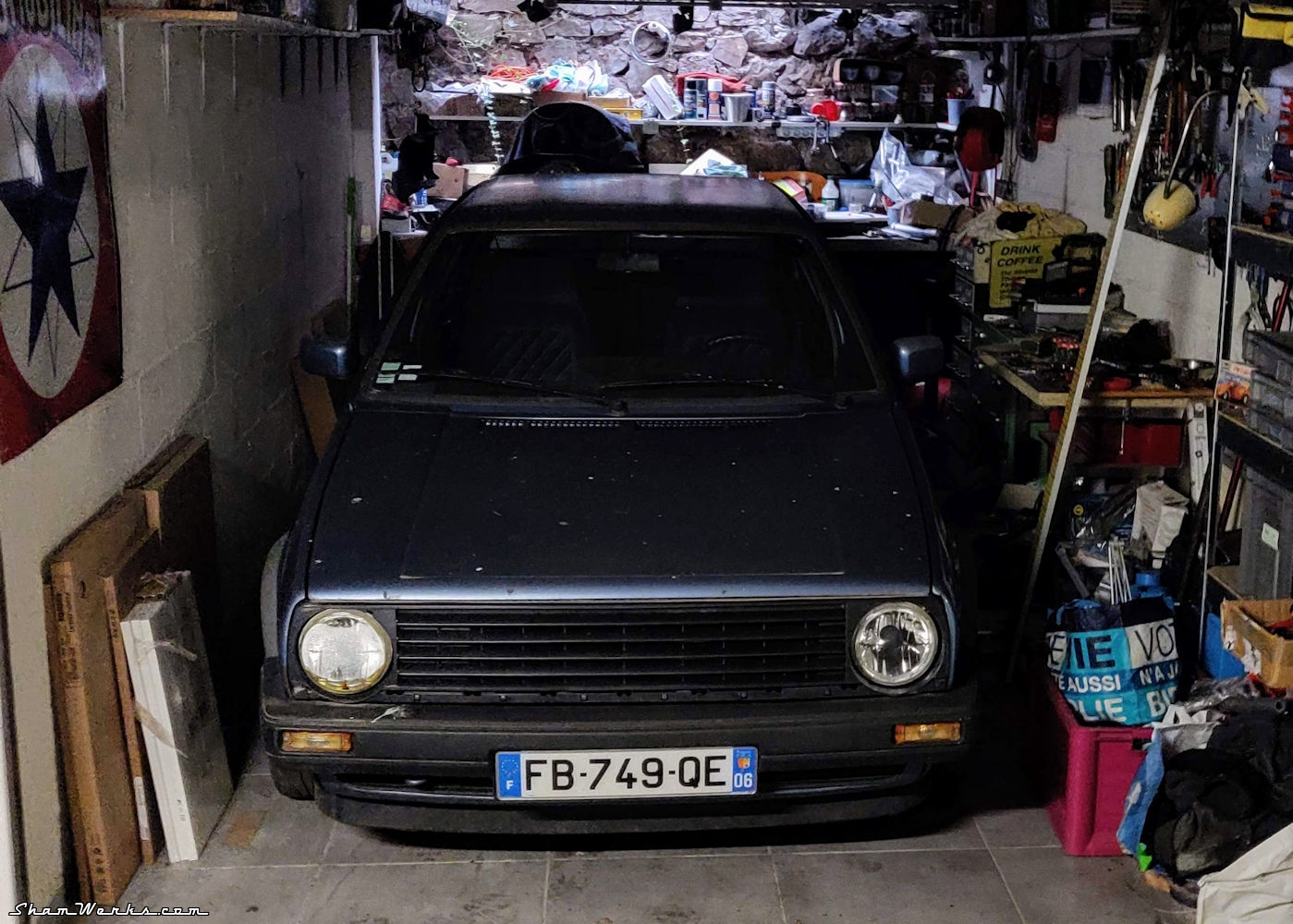 Those past two years have ben pretty heavy, and I did not have the opportunity to tighten a single nut at the garage. A new and very stressful job, the little one growing up fast, the death of my grand-mother, of my cat, moving places, a bit of an health issue, and still no electricity at the garage... Yep, life hasn't exactly been relaxed.

But I didn't stand still though! As I had mentioned in my last post, I indeed ended up buying that house, and after almost a year of pointless discussions with the architectural review board (bloody Architecte des Bâtiments de France), I finally managed to get the authorization to renovate the workshop in my new backyard!

TL;DR : building is underway, and ShamWerks will soon have a new playground! I'm not telling you any more right now, but bear with me, it'll change in a couple of months!

Let's face it, the web has changed a lot since I launched this blog, a bit over 21 years ago (first version launched in October 1998... Feel old yet?).
The type of content I provide is not of interest to a lot of people, especially due to it's redactionnal aspect, when everyone and their mother's on Facebook, Instagram or TikTok (well there are a few exceptions fortunately, like Rascals Cats, Olivier Relic...).

But ShamWerks will stand its grounds, with more detailed posts in the future. And maybe a couple of videos, who knows...

Happy New Year 2020 everyone!
Take care of your loved ones, be safe on the road, and see you back here soon(ish)! 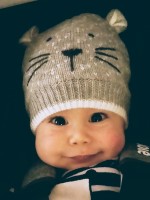 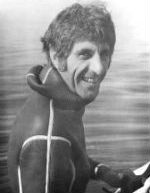 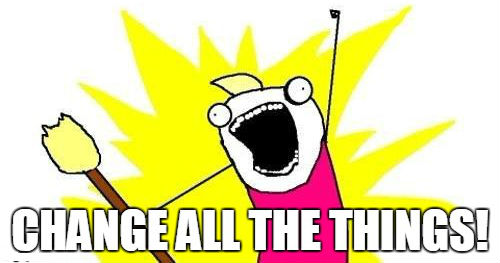 The Bamboo Containers Strike Back
Since my lovely neighbor decided to cut down all the trees that made my place a small green haven, ("because it looks cleaner this way!... Don't get me started 'bout it), I've had to build another pair of bamboo containers, to add another hedge to my terrace an regain some much needed privacy (not that I don't like my building-across-the-street-neighbors, but you know).

As the containers I built back in 2009 aged pretty well, I'll use basically the same plan.
Sorry, you'll get less pictures this time, the build method is the same ; and the picture quality is average, I only had my dying smartphone at hand,

I begin with a good Sketchup session to get the dimensions right, and find out precisely the materials I need to buy... You can download the sketchup file here if need be. Looking back, I was only half convinced by my choice of using OSB as a bottom board when I built my first set of containers (even though it's still holding 8 years later). Instead, I'll use this time a 20mm thick solid pine wood board, that look much tougher to me. And affordable, at 12.20€ the 200x60cm board ; I cut them down to the final 138x51cm by clamping the 2 boards together and cut both at the same time with a circular saw. 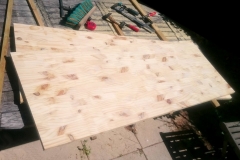 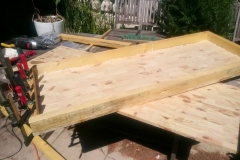 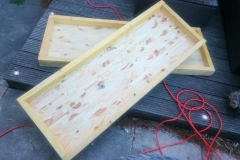 Just like the first time, I use 20mm thick weathering boards on the sides. Everything's glued together with PU glue, then screw with stainless, deck screws.
Actually, I changed my mind at the last minute and decided to make the containers 5 boards high instead of 4... So I went back to get some more, but unfortunately they didn't have the same model available, only another slightly wider one... So I had to adapt a bit for my second container, meaning the two of them aren't exctly identical. My OCD self will have to live with that! 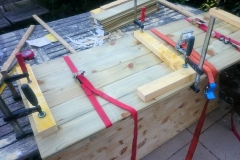 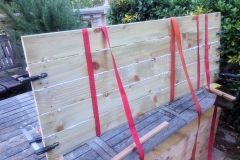 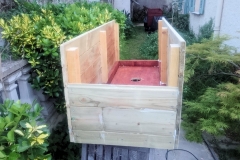 Four layers of mahogany tainted wood surface coating (inside and outside), to protect and finish it ; I used a product from the "Syntilor" brand, it's advertised as holding 10 years, we'll see about that. I perfect the water tightness with some silicon caulk, to prevent the wood rotting from water infiltrations on the long term. 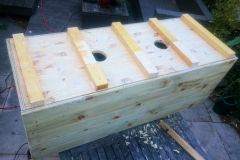 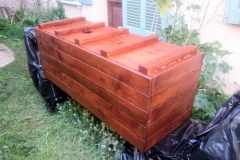 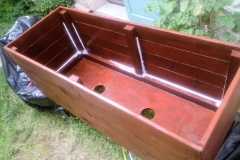 I won't use a tarpaulin inside this time, contrary to what I did on the first containers I built. I'm not convinced about how it handled humidity and roots ; Instead, I brushed two thick layers of tar (from tarp to tar... basically got rid of 1 letter). I stop a few inches below the top of the container for aesthetics reasons...
The product smells really bad, make sure you use a prooer filtering face mask, as well as gloves, security glasses and long sleeves...
Once dry (well, it actually never completely dries), it becomes inert and doesn't smell at all, and provides a watertight layer between the soil and the wood.

The bottom water outlets are, just like last time, plastic air venting grills, caulked to the bottom. Well, bad idea, should have done that before the tar, the silicon reacts badly to the tar, turns yellowish and cracks... Well, it wasn't critical, it'll do.

To enhance visual privacy (especially while the bamboos are growing), I install a reed screen above the containers : Finally, I put 3 steel cables in between them posts, and I attach the reed screen on them. 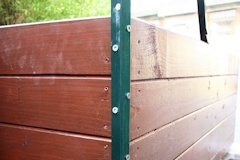 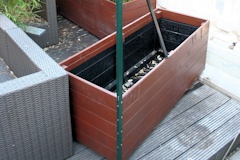 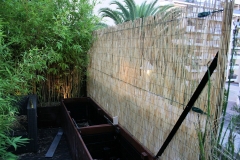 Ok, now comes the time to fill'em up!

I first put a terracotta tile above each grill to protect them from the weight of the soil above.
Then, I add a 6-7cm layer of small stones, to keep a draining layer, which I perfect with a bag of gardening pozzolan I had laying around.
Then I put a double layer of geotextile over the whole thing, to prevent soil and roots from clogging the drain too quickly. 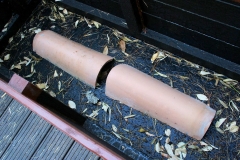 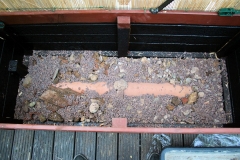 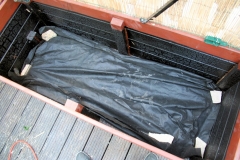 I finally add some soil (a bit over 5 bags of 60L in each container), plant 6 bamboos, taaa-daaaa!

I install four 12V LED waterproof spot lamps, to blend in with the other 2 containers... And I'm done, just have to wait for the bamboos to grow a bit, and I'm done with the bloody neighbors-across-the-street hassle! 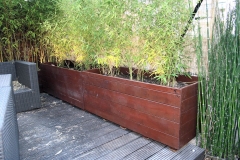 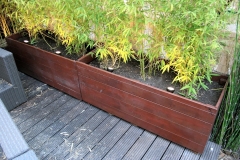 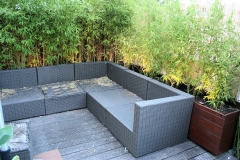 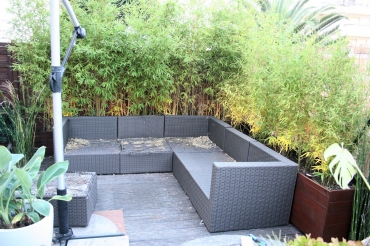 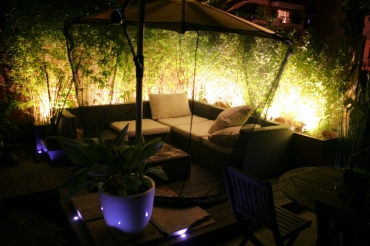 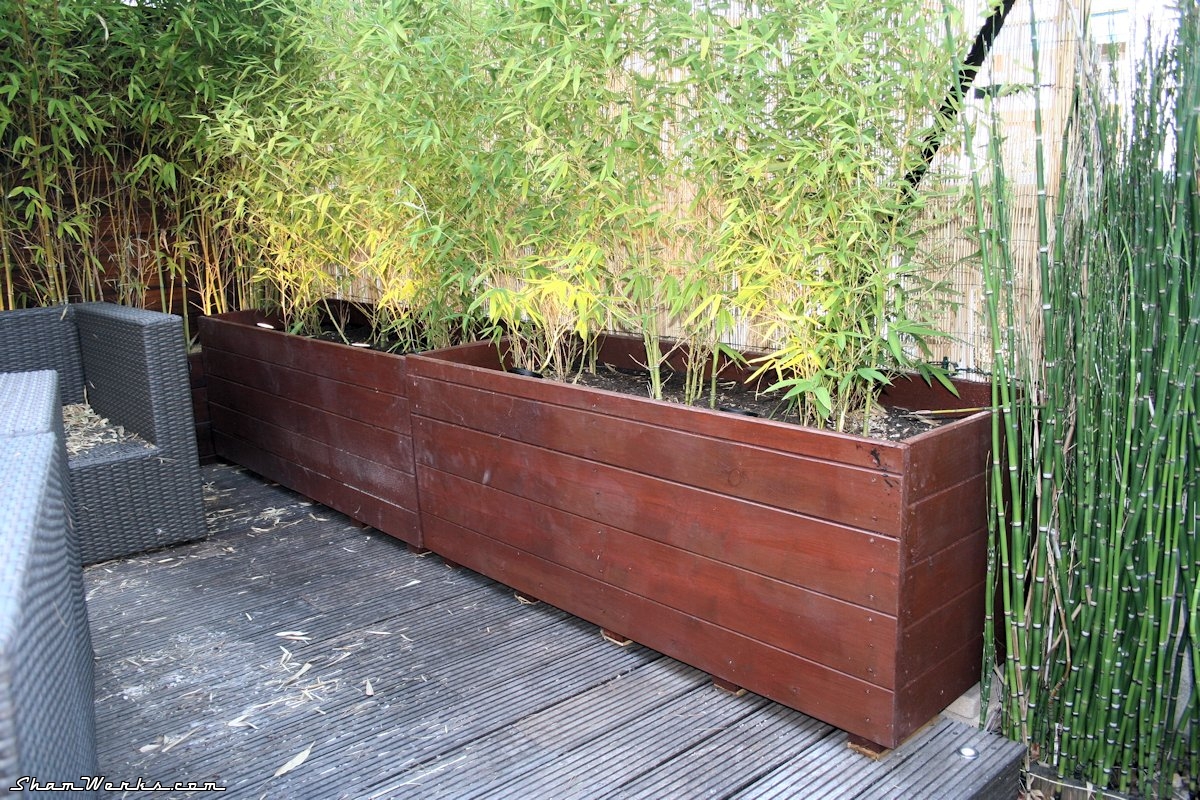 500.000 visites!
One glance to the odometer :
Half a million visitors came ome this website! Champagne!!

One glance in the rear view mirror :
ShamWerks as of today, it's 19 years of online presence, 317 posts, 95% of which translated to english, over 450 comments by visitors, and over 5000 pictures!

Both hands on the steering wheel :
Even though probably no one noticed, there's been quite a lot of evolutions on the site, to make it faster, and up-to-date with the technical state-of-the-art. In particular, ShamWerks is now mobile-friendly (say "responsive" if you wanna look fancy), so you can read it on your smartphone or tablet! (I had to go through over 300 posts to make sure it was bulletproof...).

Eyes on the road :
Right now, I have over 20 articles being written, and quite a lot of ideas for future projects. Well, let's be honest, probably way more projets than I have spare time for... But anyway, expect some heavy stuff soon!

As usual, thanks to all of you for your interest, I know many of you are long time followers. Have a good trip! 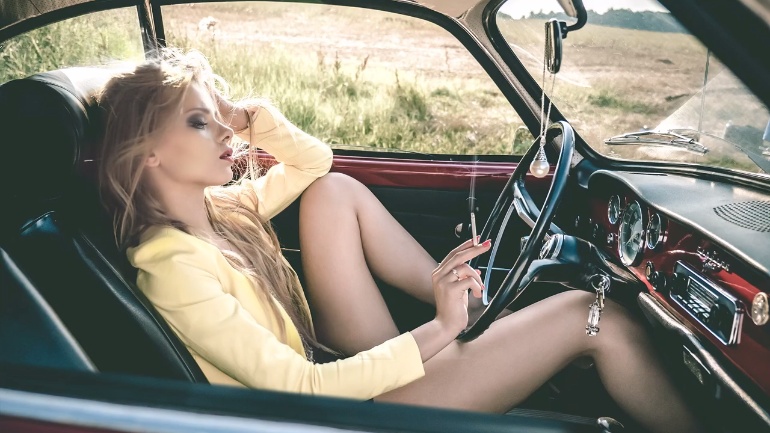