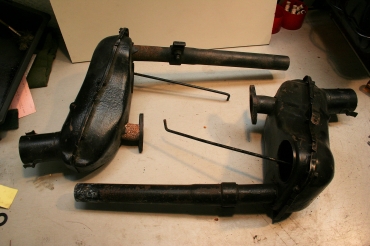 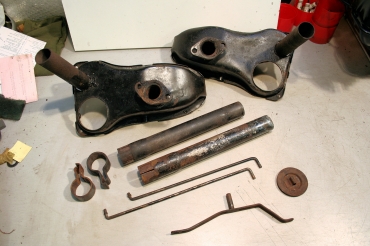 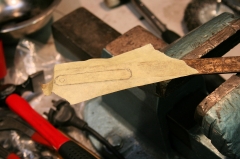 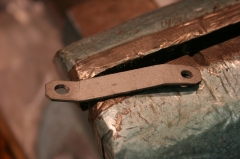 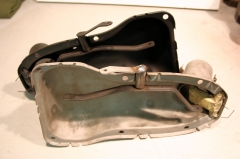 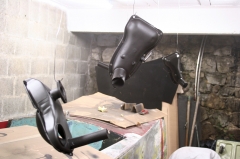 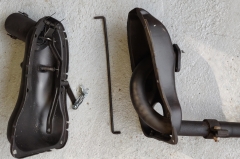 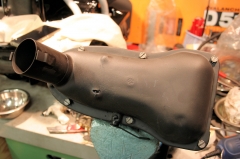 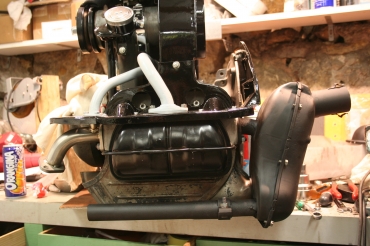 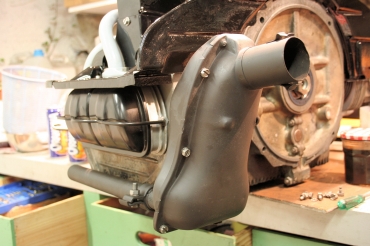 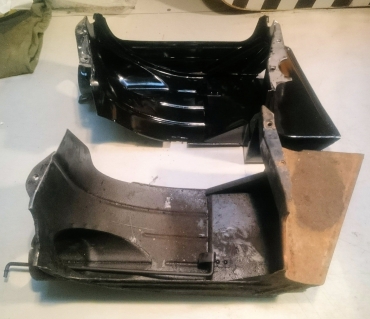 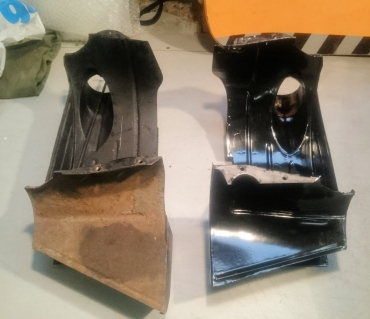 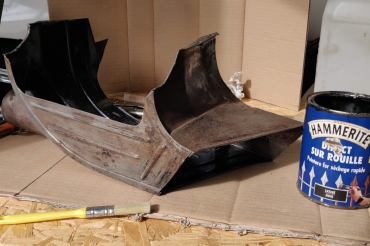 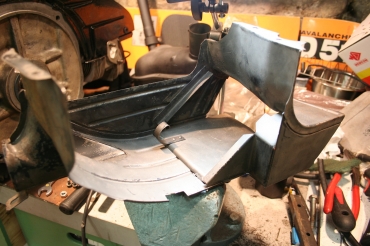 episode 11 : engine installation
The engine is finally back on the car after almost 13 years out! I took it out back in 2008 to get it restored...

As it was inconceivable to put back my beautiful engine in a dirty engine bay, I decided to get rid of the original sound deadening cardboard, as it was pretty banged up - and I much prefer that look, even if it means a louder engine. I also get rid of the little cushions hidden in each side of the body top, as they tend to promote rust.

Then I'm in for a long session of acetone cleaning to remove all traces of glue (they had kind of a heavy hand with glue at VW back then). I then grind off the pointy tabs that used the original cardboard...

I masked everything, protected the workshop around... Which won't be enough in the end, I had underestimated the overspray, the workshop floor will keep some marks... 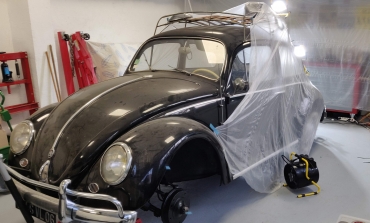 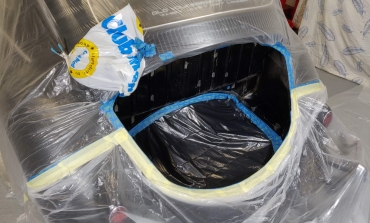 Then primering, light sanding, and finally painting the engine bay using 2-components polyurethan spray from VerniciSpray - this is not a sponsored message, I quite like their products and service (already used on the engine tins). 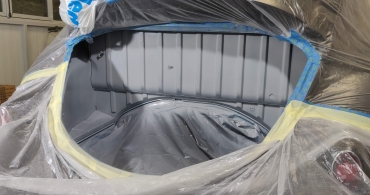 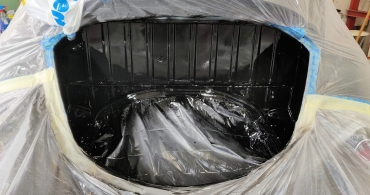 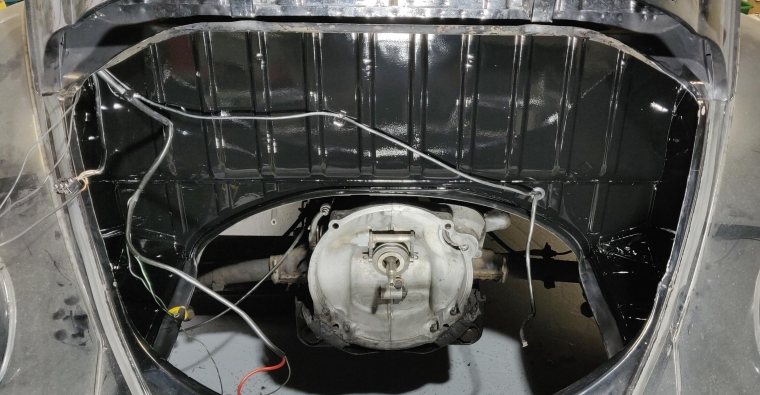 The result is pretty neat actually, don't you think? (brand spanking new engine seals too, while I was at it)

Since the engine was out, I took the opportunity to replace the gearbox stands, including the nose one, a specific model for year 1960 (VW reference 111301265C).

I also replaced the gearbox drive shaft seal, split-case specific model (VW reference 111307113C) : it has a sort of lip around it as its housing does not feature any shoulder to hold it. I still have the original 1959 seal in place, which was hard as hell and screaming for a replacement...
Gotta be cautious when installing it, as because of the lack of shoulder to stop the seal, it's rather easy to tap it a bit too much and have it go too far into the gear case. It's then pretty difficult to get it out without damaging it - don't ask me how I know that. 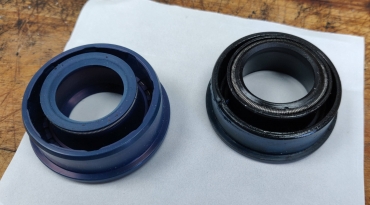 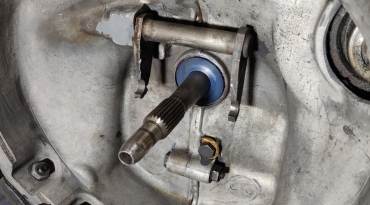 The gearbox gets an oil change, the last time was 25 years ago...

The clutch lever spring on the gearbox was broken (no idea why/how, it broke on its own), so I replaced it too. Warning, it's specific to split cases too, VW reference 111415921.

I've replaced all the fuel lines, the fuel filter (installed under the tank), and the fuel tap under the tank that always leaked a bit since I had this car. I'm a bit paranoid about fire, I'll probably install a Blazecut too in the near future...

I replaced the spark cables with new Bosch ones, while installing the little rubber cable supports specific to 59-61 models (VW reference 113905451), with a dab of vaseline so they mount easier on the fan shroud. I keep the original distributor, I'll replace it at some point with a 010...

Well... I guess time has come now, the engine is now ready to go back in its bay. Which I manage to do alone in 15mn, one of the advantages of small stock engines... 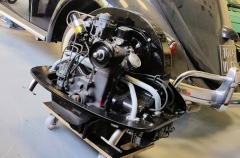 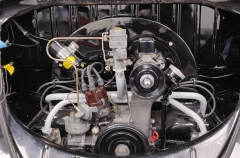 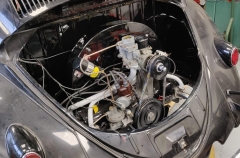 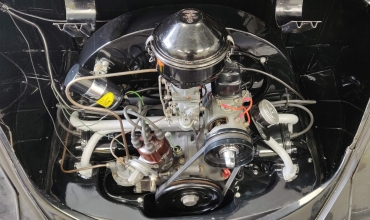 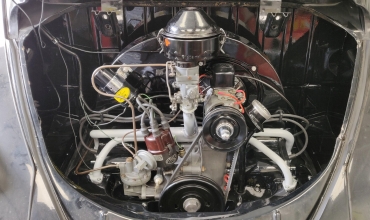 I can then mount the VintageSpeed stainless exhaust I bought 6 years earlier (!). Nice piece! This model is designed for different widths of engines, which is a good thing for me as since I modified the cylinder heads (see "closing the block" post), the engine is 6.4mm narrower...
So for once that was pretty easy, at least something not fighting me!

With a bit of adjustment on the engine tins I fit them under with the heater boxes (see their restoration on my previous post), and finally connect everything to the exhaust.

Finally, April 13th 2021 (yeah, yeah, I know, I'm Hell behind my articles publication schedule!), everything is ready for a first crank... I wasn't feeling so sure I gotta admit.

Setting the ignitor at 7.5° static advance, adjusting the rockers, priming the fuel line and pump with a vacuum pump (one of those used to purge brakes, works great for fuel too)... I also primed the oil circuit by unplugging the ignition coil and cranking the starter until the oil pressure light blinked out (takes 20/30 seconds on a brand new engine). This will prevent the crankshaft from running dry on its bearings...

And then, well... A squirt of Start Pilot, deep breath, and... Phew, that was one serious step crossed here! Gotta do some small crab adjustment, shoot my stroboscopic lamp to check ignition, plus a couple of small things here and there, and back on the road!

OK, my very first drive out ended up on a tow truck because of a failed fuel pump lever, see my edit from 2021/10/22 on the dedicated post... But since then it drives great!

Second gear cracks a bit more than I'd like when gearing down, but for now I'll keep drivin'! 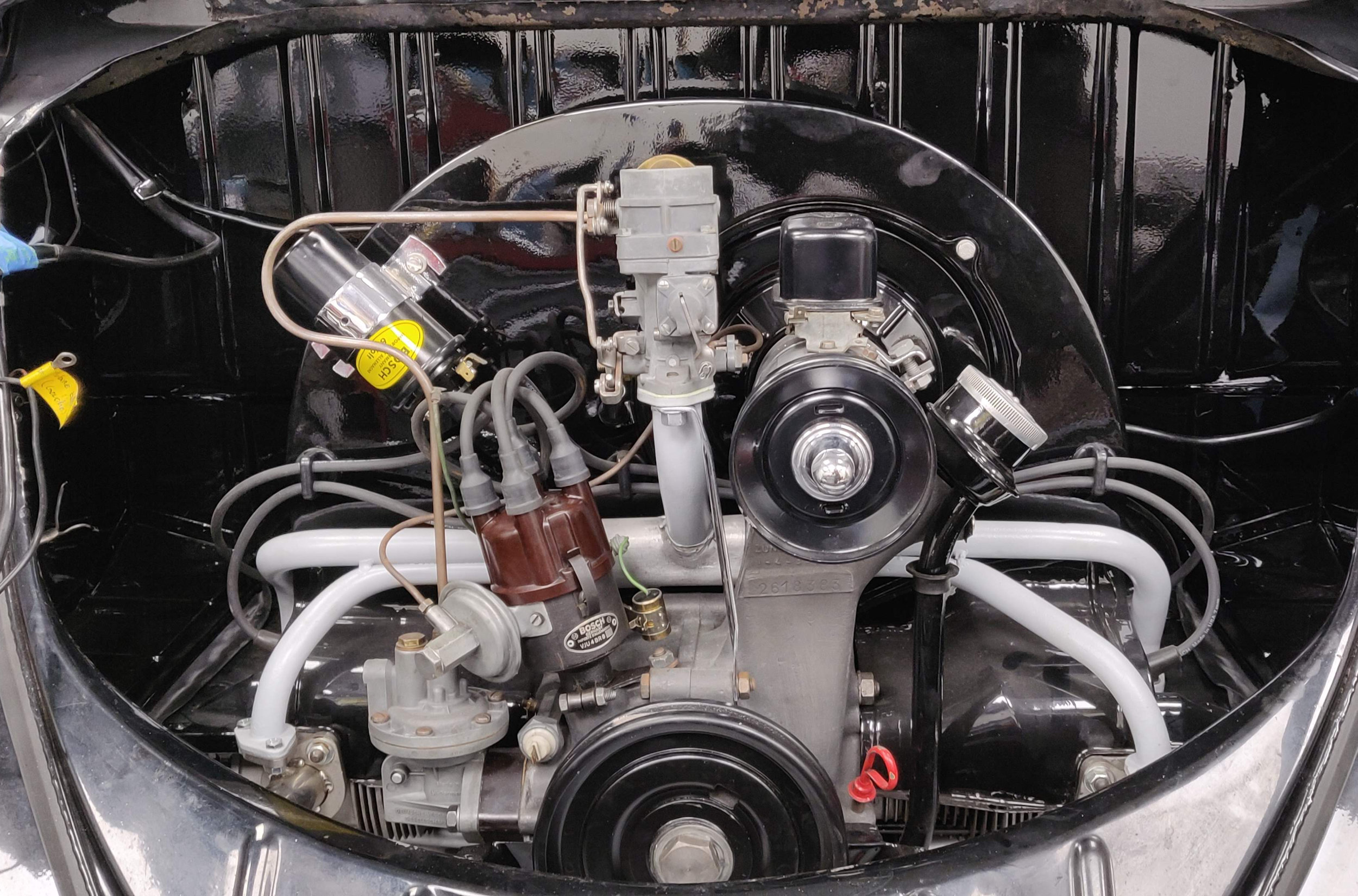