OK, my "Workshop 2.0" is pretty cool, but without a "workbench 2.0" to go with, it's difficult to work comfortably. I've been tinkering around until now on the top of my rolling tool chest, but now it's time to shift gears...

I already had built a workbench in my previous workshop : you can find all the details of its construction here ; it had even gotten a lick of paint later...
But the main difference is that back then the workbench was squeezed in between two walls, fixed on each side : in my new workshop I can not do the same as the walls are made out of insulated sandwich steel panels, which is not structurally sound. Here, the only points I can affix the workbench to are the workshop steel beam in the right corner... and the floor. The workbench structure will therefore have to be very sturdy, so as not to giggle around when I'm struggling with something in the vise....

So this time around, it won't be made out of wood, but out of steel : I'll built the structure out of 40x40mm and 80x40mm tubing (#overkill). I had some 40x40 left from the workshop building, so I tried to optimize my stock... Yes, I know, I have a severe case of undersizophobia.

Here we go : if it's not your first time here, you won't be surprised I started by a Sketchup design to find the best configuration : 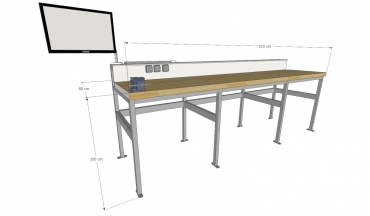 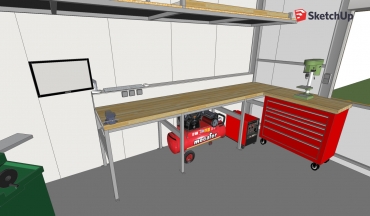 The outcome is 315cm long, 80cm deep, and 1m high, because I'm tall and tend to break my back on standard-height benches..
I had initially planned on putting my rolling tool chest under the bench, but it would then have been too high, since I have a large shelf-like mezzanine above at 2m10. So I decided on putting the chest on the side, with a piece of countertop on it, to get a L-shaped workbench. OK, let's get to it!

I start by precisely marking, on the floor and the walls, where the workbench will fit, which I will use as a reference later (a laser level is perfect for this task). As the floor is not perfectly level, each of the 8 legs may have a slightly different length, so I'll build everything "on site" to ensure a square structure and a level top.

Additional reason to build everything in place : the walls in that corner are not at a 90°, because of a shared wall with my neighbor, so this section of the workbench will not be at a square angle with the back wall, gonna have to adapt...

I then proceed to order the necessary steel from a wholesaler nearby, namely Durcomfer in Villeneuve Loubet : the 6m long 40x40 tubes cost me 36€TTC, while it would have taken me back 15/20€ per meter in a DIY superstore. Cheap, delivered the next day (for a 30€ fee), very welcoming people, I'll gladly do business with them again.

To bolt them to the floor, each foot will be welded on a flat steel "sole" 40/8mm thick. Each "sol" is then bolted with two M8 70mm screws, into two Ø12mm steel pegs. That's a total of 16 M8 screws, I'm confident this bench is not going anywhere soon. #overkill4ever

The rightmost leg is a bit special, as this is the only one bolted to the workshop structural beams. To make sure I made good welds, after spot-welding in place, I took it away to finish welding. For all the other legs, I welded everything "in place", using a mason straight edge and a plumb-line to align everything. 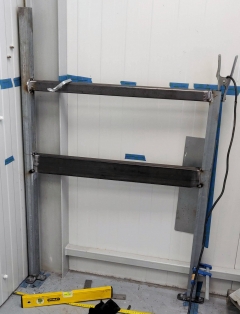 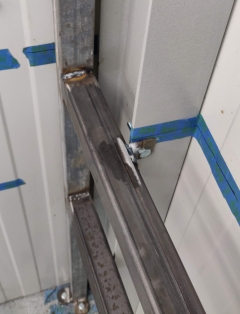 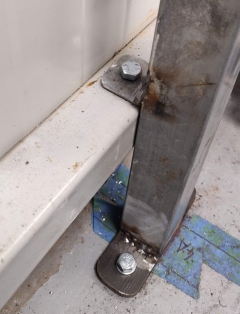 Welding is like painting : prepping is 80% of the work... So before I even touch the MIG, every zone needing welding is thoroughly cleaned of paint and rust. Then only I can spot weld on each side, to prevent warping, before finishing the complete weld.
That being said, full disclosure : I'm not going to win any competition with my welds, but they should hold!

I had initially planned on unbolting the structure from the ground to move it and finish my welds, as well as paint, behind it... In the end, I did nothing of the sort, so much for the 3 missing welds, the result is so much sturdier than I ever hoped it would be ; even when trying to jiggle it as hard as I can, it barely vibrates a millimeter. I even bought rubber pads to put between the legs and the wall to avoid any impact, but there is absolutely no risk it will ever happen.
And my very OCD self will have to live with the fact the rear face of the structure is not painted (that one actually bothers me!)

).
The reason why I did not move the whole thing, is that the welds tend to put stress on the structure : if I had removed the screws from the floor, it would have been Hell to realign everything back in place... And this workbench is first and foremost a tool I wanna use as soon as possible, sue me for taking a shortcut.

Long story short, 4 layers of anti-rust paint (Syntilor Polyuréthane gris clair RAL 7035) later , I finally have a clean structure ready to receive it countertop.
The top of the back legs is left unpainted on purpose, as I will weld stubs on them to hold the back shelf.

I ordered 2 counter tops from Leroy MErlin (french DIY store), 315cm long and 38mm thick, instead of the 58mm I originally wanted, just because it multiplied the cost by 3. I prepared the fixation by drilling 22 ø5mm holes in the structure, so I can screw the countertop from below.
I just cut slightly the right end so as to adjust the top to the not-square wall, and I secured it with 70mm screws.

Then I added the back shelf on top of the bench : I find it super useful to be able to store stuff right above the work area, plus it provides a vertical plan on which to put two dual electrical outlets... I can't remember where I salvaged the two lengths of perforated angle iron from, but it was maint to be, exactly the size I needed!

Finally I add a piece of countertop on top of my rolling tool chest : the result is an L-shaped workbench, whilst keeping the tool chest mobile if required. I had calculated the workbench height based on the tool chest so they would end up aligned...
To keep the countertop piece in place on the chest, I routed grooves underneath that nicely fit over the tool chest flanges around its work area. It doesn't move at all, without any modification of the tool chest. The countertop is then cut to fit snugly around the steel beam.
And since I was left with another piece of countertop, I've put it on two sawhorses to get an additional, temporary/removable workbench (spoiler alert of the project I'm currently working on)...

And... Tadaaaaaaaa!
The outcome is really close to my initial Sketchup concept, and fulfills its purpose perfectly.

There you go! I still gotta screw in the vise, and run electricity to the outlets, but I already actively use the bench! 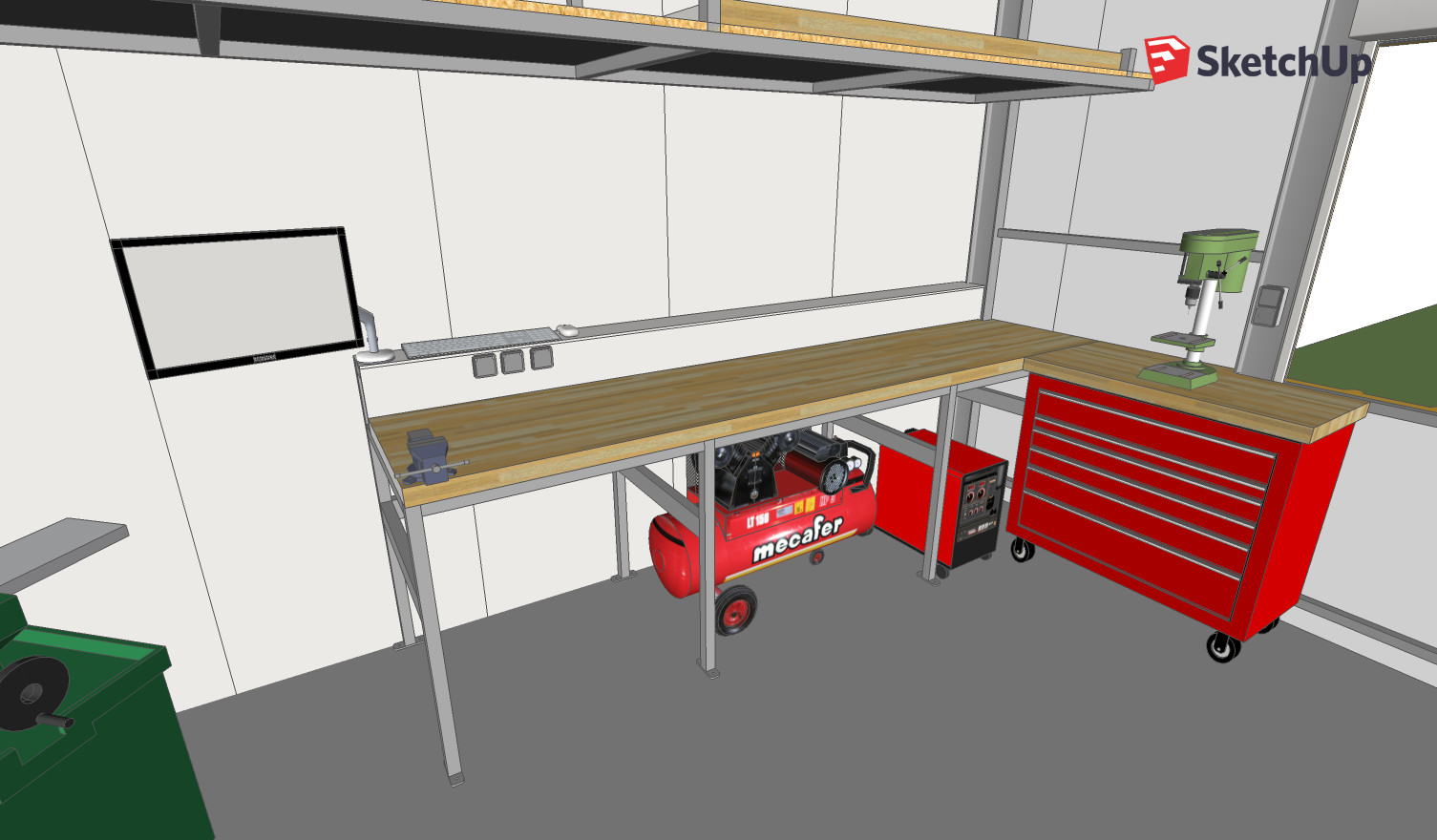