Bamboo containers
Large garden containers aren't easy to find, and really expensive... Additionnaly, I wanted mines to be high enough for the bamboos to settle correctly, while not too wide, and more than 3.20 meters long!

So I built them from scratch, based on an idea found on Vialbost.org. On Sketchup, I adapted the plan to my dimensions, trying to optimize the cuts in my boards and struts ; if you're interested, you'll find my Sketchup plan here.

So, I've made two identical containers, measuring 163cm long per 42cm wide.
The sides are made of autoclaved pine weather-boards, 179x14.5cm, 2cm thick. You can use it just like you would paneling, the boards fitting into each other. The "strip" of the last (top) board is removed with a circular saw, for aesthetic reasons (use a plane block and sandpaper for finishing) ; that strip is then glued into the bottom groove, for enhanced solidity and to avoid moist getting in there. The boards are glued with polyurethane wood glue and clamped using ratchet straps, while waiting for the glue to set. 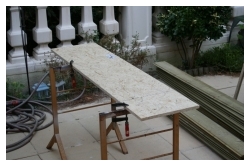 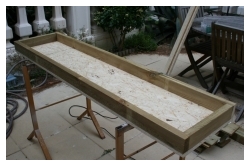 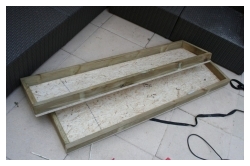 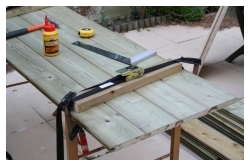 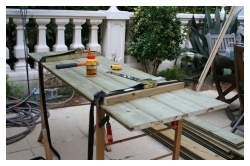 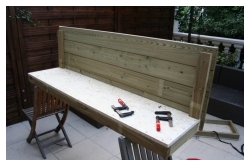 The bottom of the containers is made out of 18mm thick OSB ; that's a purely economic choice, 9 euros for both, it's a real bargain! It would have cost arround 60 euros in plywood... OSB is far from being as solid as plywood, but here, with less than 30cm between each bottom supports, it will be more than enough. In the other hand, OSB is very sensitive to moisture/humidity, you must protect it. Three layers of wood surface coating (inside and outside), along with the inside tarpaulin, should do the job. 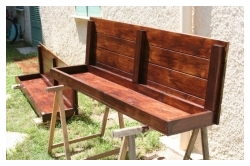 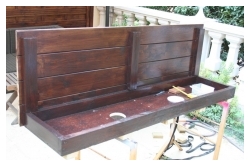 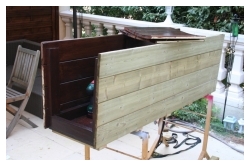 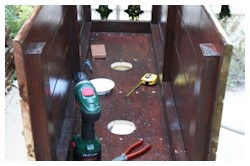 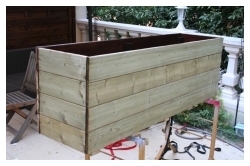 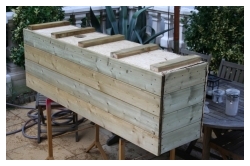 All reinforcements and uprights are made of 70x32mm autoclaved pine struts. These are the very same struts I used for the decks.
I used a stock of 4x40mm. stainless Torx screws I bought by mistake (not the right dimension) for the decks. Since I had 500 of them, I did not hesitate in the number of sreews during assembly, to make sure it will remain solid though time : 175 screws per container! 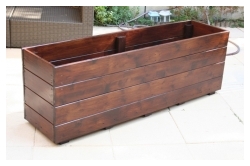 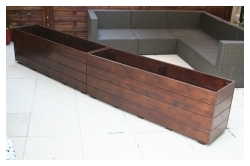 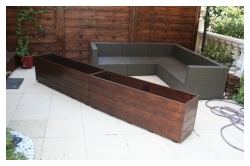 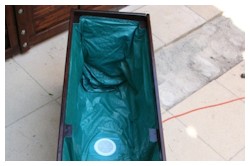 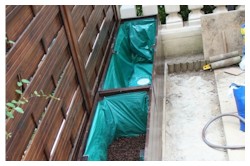 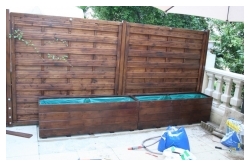 The bamboos are not planted yet, I was late and I believe I will wait till next spring to install them.
Phew! Yet another thing done!

By Internet Magic, we already are on next spring!
So, end of May, Blue Toad is on duty again to fetch 6 containers filled with 160 to 180cm high bamboos. I felt like I was inventing green tuning in my car.

So, finally, here is the result of my bamboo containers... I must say I'm quite impressed by the speed at which these guys grow, almost 40 centimeters the first 2 weeks after I installed them!
The 4 wire you can see in the front of the containers are for lights, they'll be hidden by the couch.
Bamboo containers... Check! 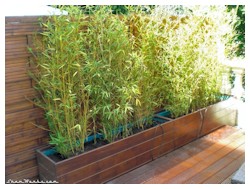 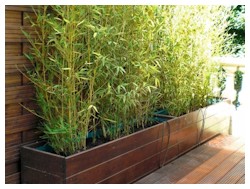 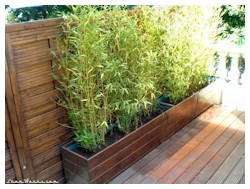 By the way, good to see that my design inspired other realisations : here on Zep's blog! (french only)

This article is the most read on ShamWerks, and I'm often asked how are my bamboo container doing now.
So, 5 years later, here's a quick update!

Below are a few pictures of my containers as they are today : 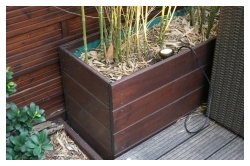 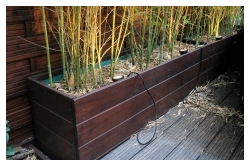 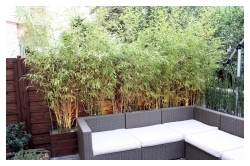 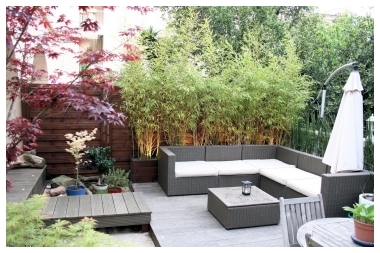 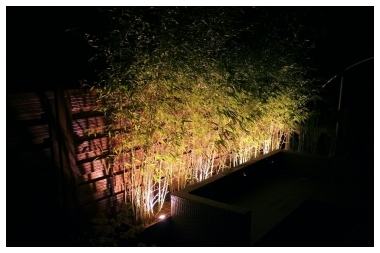 For those of you who feared the bamboo roots would pierce through the wooden containers, here's the proof they're doing just fine. The left one just got a bit of a billow because of the roots pressure (about 3cm measured in the middle), but no sign of weakness, crack or leak.
The bamboos are now about 3 meters high.

If I had to do it all over again, I'd change the tarp : that el cheapo one doesn't handle humidity too well, I should rather have installed one of those heavy duty root barriers, which would have kept it water-tightness (the objective being to protect the wood from humidity). Or maybe, simply brush a few coats of tar in there.
The OSB bottom is doing fine too, giving no signs of fatigue ; thinking about it, I should probably have gone with the more expensive plywood anyway, just for my peace of mind.

The coating looks perfect. It was V33 brand "8 years warranty", a really good product, I'd gladly use it again. Well, to be fair, the containers are quite protected from wind and sun ; the wooden panels behind them received the same coating, but being more exposed, they don't look as pristine.

I finally replaced the originally halogen lights by LED ones ; Halogen got too hot, and front glass broke all the time because of thermal shock with humidity... No more problem with LEDs that barely heat at all - and draw much less power!

So, that's it for this update! I'll keep you informed about the evolution of these containers in a couple of years from now!

I had to make two additional bamboo containers! The article is here, go check it out! 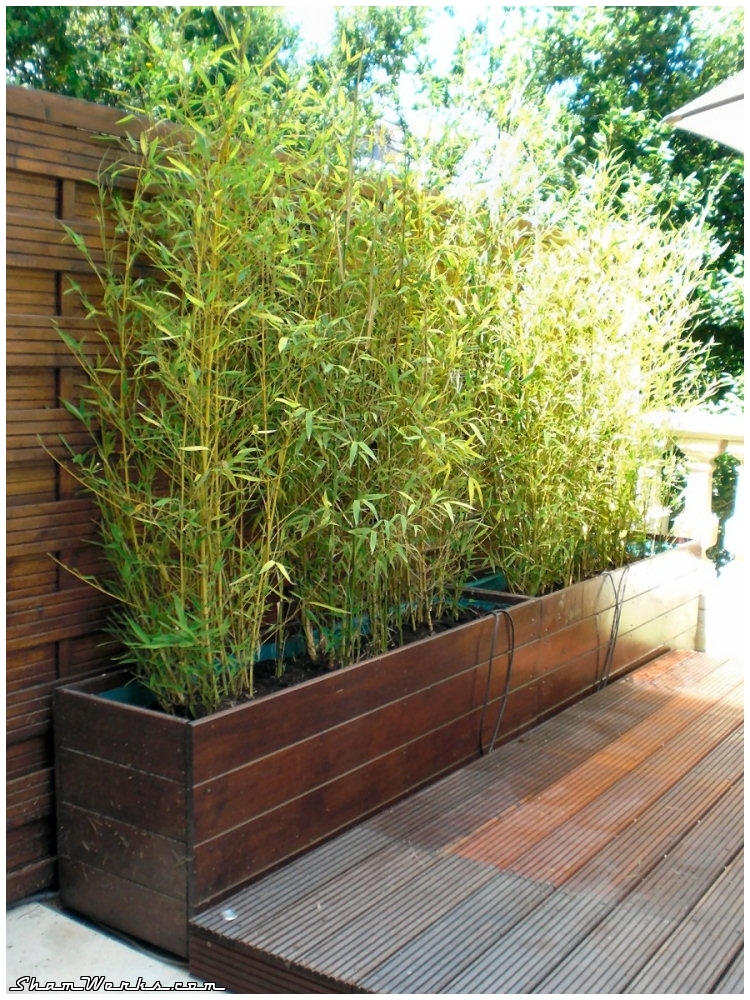