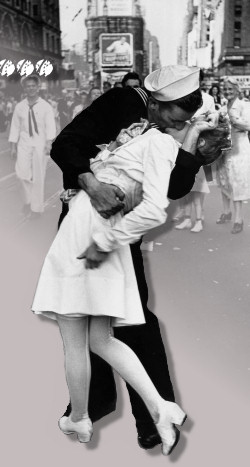 120.000 Hits on ShamWerks, so in order to respect the tradition, here is the ritual pinup!

As usual, many thanks to all of you for your loyalty, I know ShamWerks has its own small clientele of regular customers, coming back to the bar...

Today's pinup is not only a sexy girl in a nurse outfit...
You probably already have seen this image. It's a picture I like a lot, not only because of the high-heels and fully fashioned/seamed stockings (don't judge me!

), but more for the symbol it represents...


That kiss was shot on Time Square (New York) by Alfred Eisenstaedt on August 15, 1945 : on that very day, Japan surrendered without conditions (cf. previous article), ending the 6 long years of conflict of World War II.
This picture, published by Life Magazine, became the icon of the "VJ Day" (Victory over Japan), and of the resulting jubilation people felt that day. You may want to read on Wikipedia the story of this picture...

I didn't choose this pic randomly : first, in a bit over 3 weeks from now will the celebrated the 65th birthday of the VJ Day.
But moreover, this is a small tribute to Edith Shain, the nurse on the picture, who passed away last month; she was 91yo. ... RIP.